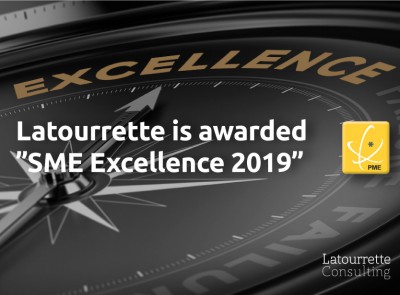 2020-04-07
IAPMEI, the Portuguese State Agency for Competitiveness & Innovation, in partnership with Turismo de Portugal, the Portuguese Tourist Board, and the main Banks operating in Portugal, has awarded Latourrette with the “SME Excellence” status, in  recognition of the company's merit and contribution to the Portuguese economy.

Coming upon the heels of being nominated SME Leader, this award is the second recognition awarded by IAPMEI and Turismo de Portugal, and it positions Latourrette within a highly selective group of companies. This places a seal of assurance upon the company that allows it to deal with suppliers, customers, the financial sector, and regional and national authorities from a platform of of trust and top performance expectations that promotes business development and growth.

For companies with fast-track internationalisation like Latourrette, the “SME Excellence” status recognition is particularly relevant, since it becomes factor of differentiation and a guarantee of the solidity and sustainability of the company.

Latourrette is a Portuguese Consulting & Integration company that specialises in robotic process automation through technology and AI. Their operations now span 13 countries across 4 Continents. While the internationalisation of Latourrette started back in 2018 with rather ambitious goals, their results seem to be surpassing even the most optimistic of predictions:
• Their current projected sales are now standing between 3.5 and 4 million euros, way above their initial objective of 1.2 million.
• While they initially targeted international sales at 37.33% of total billings, 79% of sales now come from their international operations.
• Their initial plans included 7 international markets - they are now present in 13.
• New hires are currently surpassing initial estimates by 200%.